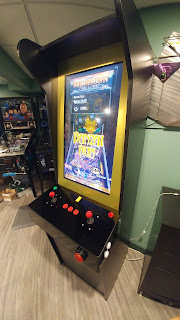 So having a traditional virtualpin was fun in the beginning, the problem being is 1) It took up space from my real pinball machines 2) I never liked the lack of depth perspective on the tables.  Then the FSS view tables were developed by Arconovum, got me thinking about a upright cabinet that would still allow for virtual pinball tables, but at the same time taking up less space in my basement.  So when randr started his ICB project on vpinball.com I really liked the shape of the cabinet, and thought why not a FSS view machine and throw 2 joysticks in to play virtual Ice Cold Beer as well.  So I started designing the cabinet based on some rough dimensions from the web.  When first showing my design to Arconuvum, he suggested adding vertical Mame games as well.  So adding 3 more buttons allowed all the vertical MAME games to be added to the games list as well.

Right now I am using PinballX to launch all the games and is working quite well for what I am wanting in a front end.  The build itself is a 32" TV rotated to portrait view, which allows a great view of the FSS tables.  the computer is a I7 processor, 8GB ram and a 750ti graphics card to make sure everything is looking great and plays well. I am running the Visual pinball tables on exclusive fullscreen and have had no issues with ball stutter.  inputs are run though a ledkeywiz gp16 +16 from groovy game gear (I had this left over from another idea) I will be hooking up the lit buttons to work with DOF in the future.  Also I had a older nudge and input device from Zebs boards, this has allowed for more buttons to be added and the big plus of having the ability to nudge the tables.  The joysticks are Zippy 2/4/8 ways.  I have the left joystick set to 8 way and the right to 2 way as this is a one player cabinet.

The cabinet itself is built using 3/4" black Melamine board, which allows for a nice finish but is very easy to chip the edges.  I may add side decals in the future and the smooth surface will help with application.  The control panels was built using 1/2" black Acrylic, now Acrylic is not the easiest material to fabricate with, but I have been working with it for 20+ years si I always like to Incorporate it into my builds. The bezel is a material called Dibond, which is Aluminum skin with a plastic core.  I had a piece that was silver on 1 side and gold on the other, I am quite happy i chose gold side out.  I cut the frame of Dibond and adhered Acrylic behind to protect the TV.

If I was doing this again, I think I would have the cabinet sides incorporated, to become the side of the control panel.  Also I would try to use a real lockdown bar to add to the build

In the future I plan to add a shaker motor, along with some more DOF lights, and flipper feedback to help add to the realism. 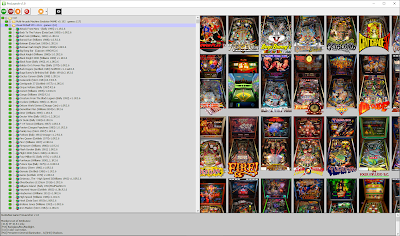